Mr. Random got me an Instant Pot for Mother’s Day – or Christmas, or just because, or something – I don’t remember. It’s this one. 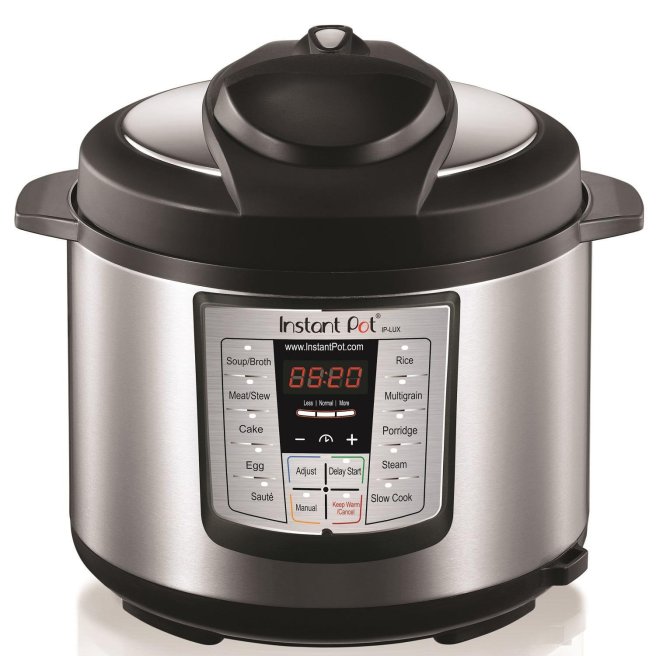 I have no idea the difference in all of them, they just are. I’ve only made a few things in it, though I make those few things often.

There is a facebook page: Instant Pot Community that I’m pretty sure is run by Instant Pot. There are a bunch of good recipes in there, but some of the members are douches, so you have to take them with an “I don’t give a shit if you’re an asshole” attitude. There is no rhyme or reason to the snarkiness. One post one day will ask for help and everyone will be nice; the next time those same folks are mean as shit. Last week some woman asked for recipes to make her husband lunches to take to work, and it was a shit-fire storm that any woman today would make her husband lunch – Men could do it themselves. Gah. But, Fuck, don’t make a post calling members out on that shit, because then all the “I’ve never seen anybody be mean to anyone here” posts come out and it turns into a screenshot war – right up until the admins delete everything. There must be admins in every time zone, because they come out with a quickness to turn off comments and delete shit!

I’m also a member of: Weight Watchers with the Instant Pot, The Paleo Instant Pot, and InstantLoss.com Healthy Recipes for Weightloss.

There are lots of good groups out there. It really just depends on what you want to cook.

The truth about the instant pot: I like it, and the things I cook are easier to cook, but the instant pot does not make them cook any faster!  It’s more the ease of throwing everything in a pot and walking away and doing other things while it’s cooking – instead of standing in front of the stove watching and stirring. I’ve heard (and seen photos) that you can bake breads and cheesecakes in it, but I haven’t ventured that far into it. Maybe one day!

I’m glad we bought it and it has made some things easier, but I’m not a mega fan that feels the need to have 5 of them – yes, those people are out there; Nor do I think that it replaces stove and oven cooking. Maybe as I cook with it more and more I’ll find more meals that will change my mind!

One thought on “Instant Pot”