This is the cover from the Library: 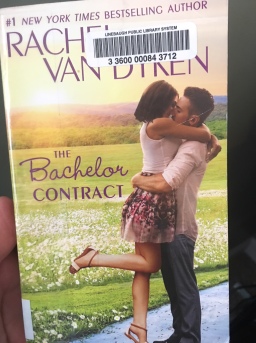 This is the 3rd book in the Bachelor of Arizona series.  This book was not my favorite. I hate to say that, because you know I have nothing but love for Rachel Van Dyken, but damn! How come when a dude is all “I lost the love of my life” that he has to become a man-whore to fuck his ex-love away? That shit just gets on my nerves.  It took me a long time to read this book. I’d sit it down and then come back later and read another chapter. Very unlike me.  I just didn’t like Brant at all. Like, I actively disliked him. I was surprised by that, because I felt like in the other books of the series, that I thought he was funny. :/.

There were parts of the book that I liked. I liked the dates that he tried to recreate and show her how much he really did care, and how Brant and Nikki found their way back to each other. Being part of the healing process was heartwrenching, and of course I cried. The loss that they had to endure clawed out at me, even though I didn’t really *want* them together….. Speaking of which, I’m wondering if Cole is going to get a book! I was kind of hoping Rachel had written another Sanchez-y story line. No such luck….. I was still happy that they could be reunited.

To be fair, I’m not a huge fan of Second-Chance romances. I’m a grudge holder, so I find it hard to get involved in a story where two people try and get back together. Maybe that is something I should work on! Personal Growth! 🙂