So, I had the opportunity to go to San Antonio for an indie book event. In May. Which is now a long time ago, but I don’t feel like I’ve had time to sit down and actually write about it!

I won a free ticket to go to the Wanderlust Book Signing from a “like and share” post that Jonny James did. Hell yeah. I was going. haha. So, I got on Southwest.com and started looking up flights to see how much they were and got on airbnb and picked me out a place to stay!

I actually ended up applying for a Southwest Airlines Visa, so I could get hella rewards points, and since I got the credit card, I went ahead and got a ‘Customer of Size’ 2nd seat. The deal with Southwest is that if you buy a 2nd seat, you are guaranteed that 2nd seat, and once the travel has been completed, you call back to customer service and the 2nd seat is refunded. It is more used as a placeholder for selling purposes. You can also take your chances at the airport and ask to use the COS policy, but if the flight is sold out, I’m not sure how that happens. For me, the anxiety of that would overwhelm me. I’d rather have a charge on my credit card that will be refunded! I know I heard some flack for their COS policy years ago, but I think it was smooth and didn’t have any issues. I’m in a couple of plus-size traveling groups on Facebook too, and no one in those has mentioned any issues either.

My momma has a corporate account with an “Express Park and Ride”. That was fantastic! I drove up to the parking lot, gave them my info and keys, they loaded my bags unto the bus and drove us over to the airport and unloaded our bags and dropped us off at the doors. It was so much easier than trying to find a place to park and deal with getting in.

So, I made it to San Antonio on Thursday early afternoon. I got an uber to my airbnb. It was weird, but it was more loads cheaper than staying in a hotel for 3 nights. I stayed in an old 1800’s farm house. It was a really awesome house. All the wood detail. Built-ins in every room. A dream house. Except my room was up a flight and a half of stairs in a house with no central air conditioning….eek. Luckily they had a window air unit that worked really good! By the end of the weekend I got used to everytime I left the room that the air would get sucked out of my lungs from the heat!

Anyways, I got all my stuff dropped off, found the San Antonio interactive bus routes online, and off I went into town! 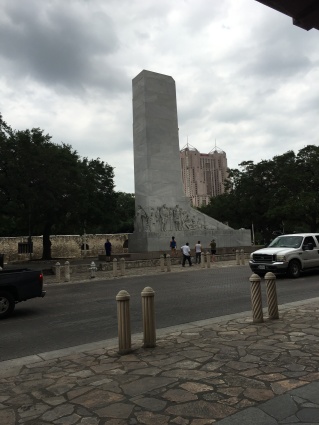 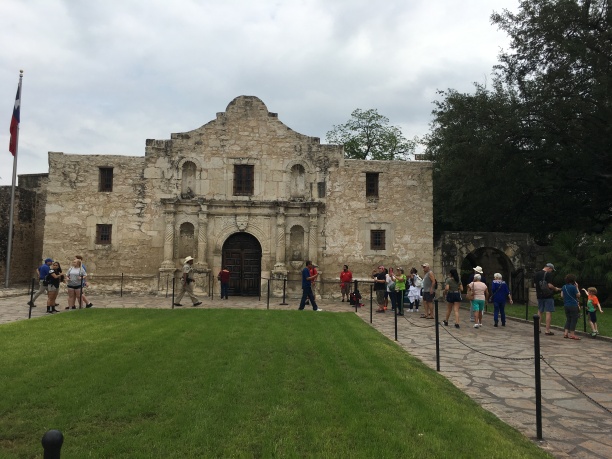 I’ve never been to The Alamo before, and I don’t think I’ve ever learned about it in school either. Honestly.  I know there is no basement. Thanks, Pee Wee! ~~ Yes, I love Pee Wee.

First of all, The Alamo is just there- Just walking down the street and suddenly you are in the Old Fort footprint. What used to be parts of the grounds now have streets going through, and a whole sidewalk of touristy stuff. The church is just a small part of the mission! It was really neat to be inside the building. It was really beautiful, and it was so cool! If my house was stone, I wouldn’t need an air conditioner! I spent a couple of hours on the grounds. It really was interesting. And weird. I haven’t done anything like that without my kids in so long, it was odd.

After The Alamo closed for the evening, I headed down to Walgreens to get a few things to eat and headed back down to the airbnb.

I got in the shower and went and then went out and had dinner with a friend of my dad’s who lives down there. I can’t remember the name of where we went to eat…. if I ever knew… but I had one of the best Spring Rolls I’ve ever had in my life. I should ask her what that place is called.

I got back to the house to get some sleep! It was a long Thursday!