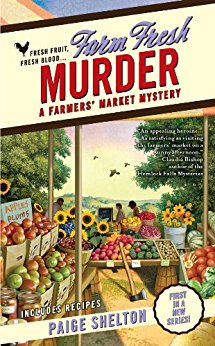 This series caught my eye at the library! I know, not a romance novel or a true crime?! It’s a miracle… Not really, I do love a mystery.

I didn’t know Farmers’ Markets were so exciting! In fact, murder aside, I never even thought what must go in to running or having a booth at a market. Having to haul all your stuff back and forth. Being out in the elements. I don’t think that having a stall at a farmers’ market would be for me. But, I know next time I go, I’ll be thinking more about what goes into getting the fresh foods and goodies.

Poor Becca, she just can’t help herself. I understand the wanting to help a friend, but who wants to be shot at while doing so!? Not me. Ha. I did appreciate Becca though. The fact that she’s been married and is a little cynical. The fact that she finds a love interest in a younger man. I think she’s fabulous and someone I’d like to be friends with. — Maybe, as most series’ go along, bad things always happen to the protagonists friends and family, and I don’t want that shit. – 🙂 It makes me want a greenhouse full of beautiful flowers. But, sadly I don’t have a green thumb and everything would be dead. A greenhouse graveyard. eek

I will say that I can usually figure out who the killer is and why, but with this book, I really didn’t know until it was revealed!

There are recipes in the back of the book. I have tried one of them, and I’m going to try the other’s and do a post. I thought that was cute to include the vendors recipes!